Turn Off Windows 10 Feedback Frequency Option After April 2018 Update:- Microsoft may have released it’s Windows 10 April 2018 Update on30 April 2018, complete with build number 1803 and rammed full of new additions and feature improvements, but it hasn’t exactly been rolled out into the global community without issue.

Some users have taken to social media to complain that the “Feedback frequency” setting in the new update is automatically set by the system and is unable to be changed, which is something generally managed by the Windows Insider Program. they have been asking since then how to Turn Off Windows 10 Feedback Frequency Option After April 2018 Update?

This particular setting is designed so that users can be alerted by Windows 10 in order for them to give feedback and sent diagnostic and additional information directly to Microsoft. Like most companies, Microsoft will then try and use this information in order to improve the product and to try and solve niggles that device owners may have.

However, it’s always a setting which can be disabled, or through which the request frequency can be handled and managed by the user. For those subscribed to the Windows Insider Program, it’s a different story as Microsoft needs that information, but it seems to be forced on standard non-Windows Insider users with this latest update. 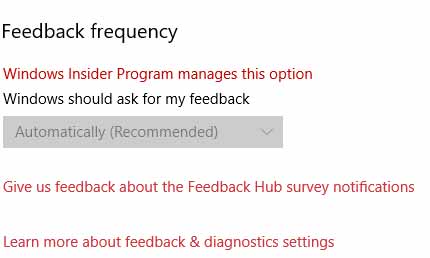 The concerning thing is that users are actually stating that this problem is happening regardless of the machine they are running the latest Windows 10 update on, even if that machine has never been associated with a Windows Insider build, and regardless of how the update was installed to the machine.

The good news is that there is actually a cumulative update which has been offered to resolve the problem, which can be grabbed automatically once it’s served or can be downloaded from here, and installed with a manual installation. It’s then a case of running the following command in an elevated command line instance once the .cab file has been downloaded:

Hopefully, that should solve the problem for anyone who is not part of the Windows Insider Program and who is suffering from this forced setting at Settings > Privacy > Diagnostic & Feedback.

Once installed, that section should no longer be grayed out and automatically managed by the Windows Insider Program. Control should be once again handed over to the device owner to manage how they see fit.